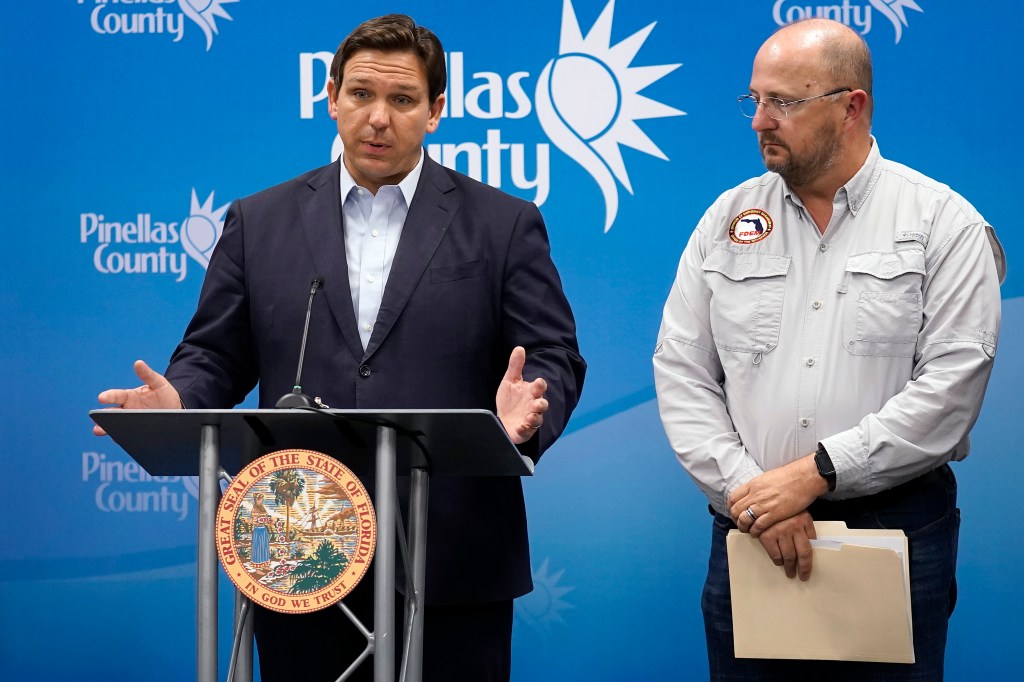 The politics of natural disasters can be tricky. Yes, a hurricane allows elected officials to change into formal “hurricane casual” fleece attire emblazoned with the respective state’s logo. It offers an opportunity to stand in front of a bank of cameras every news cycle, with a group of emergency personnel standing by, and update citizens from their televisions.

But if handled incorrectly, the downside is high — especially for Florida Gov. Ron DeSantis, who must navigate Hurricane Ian with re-election less than two months away — all while national Looking to the future.

History is full of disasters that make or break a governor’s success. Take Massachusetts Governor Charlie Baker. After winning his 2014 bid for the corner office by a razor-thin margin, Baker’s first 100 days in office were marred by historic blizzards. The winter of 2015 was punishing, paralyzing public transit systems, closing businesses and leaving thousands of communities without power for months on end.

Despite the political heat, Baker’s daily press briefings and leadership during extraordinary circumstances helped him win over new constituencies. His administration teamed up with top Democratic officials — leading to a so-called “bromance” between Baker and then-Boston Mayor Marty Walsh, now Secretary of Labor. Baker’s able administration pushed his approval rating to 70%, where it has remained ever since. That’s an impressive feat for anyone, let alone a Republican presiding over a state where less than 10% of voters are registered GOP.

It doesn’t always work well. In the waning days of the 2012 presidential campaign, Superstorm Sandy struck New Jersey, destroying 127 miles of the state’s coastline. Gov. Chris Christie, a rising Republican star and top surrogate for then-GOP nominee Mitt Romney, put national politics aside and focused all his efforts on his state. In the process, he welcomed President Barack Obama to New Jersey in a way that repelled many Republican voters hoping that Romney would win.

Ultimately, Romney lost the election for reasons that went beyond Sandy or Christie. Yet some GOP loyalists harbored resentment toward the former New Jersey governor, and it became a factor during his own presidential run in 2016.

It’s a safe bet that all of this history is playing out in Team DeSantis’s mind right now. On the face of it, Ian may seem like an unwelcome distraction to the emerging Republican national political agenda, especially as he is gaining ground among conservatives.

But Ian gives DeSantis a chance to speak beyond his base or politics. There are thousands of people in Florida who are learning about their neighborhoods, their homes, their livelihoods. They want to know about the availability and sustainability of fresh food and water, and they are willing to listen to anyone with answers.

It gives him an opportunity to connect with voters who may not be swayed by his decision to send 49 immigrants to Martha’s Vineyard. Politics takes a backseat when people are concerned about the well-being of their loved ones and communities.

In fact, some who may have already passed judgment on DeSantis may do a recount if they live up to this moment. So far, DeSantis has been working closely with the Biden administration and praising the president’s emergency declaration to provide aid. Images of thousands of utility trucks lined up to restore power serve as a sobering, reassuring sign of his response efforts. Given his political ambitions, his scorecard from Floridians will go far beyond the Sunshine State and might give otherwise reluctant voters a reason to give him another look.

With its booming economy and growing population, DeSantis already has a story to tell on the national stage. Now he has an opportunity to add to his repertoire an able and compassionate consular chief.

Good policy leads to good politics. Hurricane Ian may devastate Florida, but it may very well supercharge the political future of its governor.