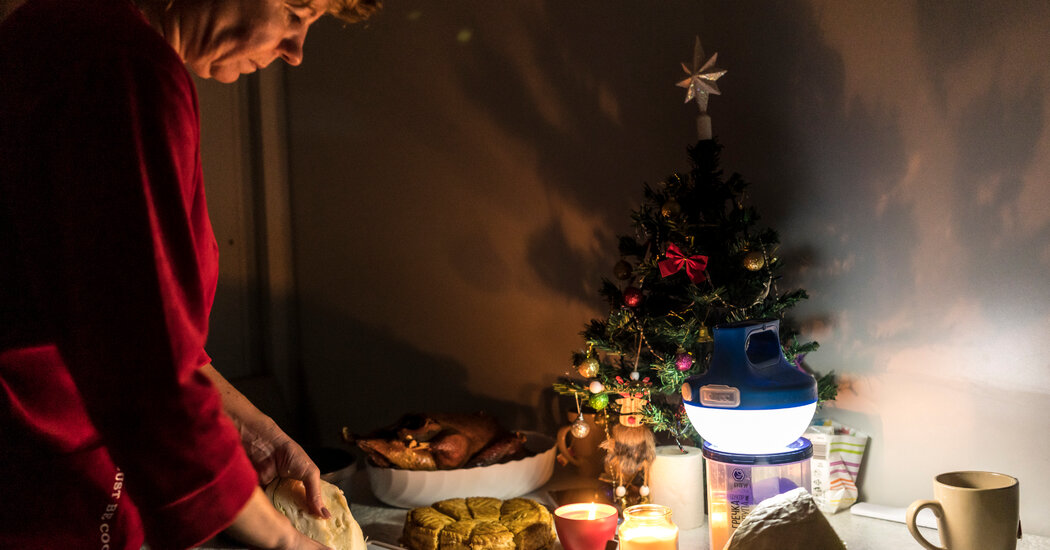 Behind the metal door of a small barn wafted the smell of oranges and roast duck as Oksana Kovtun put the final touches to her family’s Christmas dinner.

As she stepped out from the warmth of a tiny modular home to table the bird, a thin dusting of snow settled on the collapsed walls and debris strewn in the center of her yard.

It’s all that’s left of her family home in Makaryev, destroyed by shelling this past spring as the Russians made their failed take on the Ukrainian capital Kyiv, about 30 miles away.

In the Eastern Orthodox tradition, Christmas this year fell on a Saturday—the church still uses the Julian calendar instead of the newer Gregorian one—and the set-piece family meal falls on Christmas Eve. Friday was the first Christmas Eve that Cowton spent in the war, now living alongside the ruins of his home in a donated temporary building.

With one of her sons formerly in the military, and no permanent home, the past several months have felt punishing at times, said Ms. Covatan, 49.

“But there’s nothing else to do, we have to stop,” she said. “You can sit and cry, but then you get up and get to work. And that’s it.

The Kovtuns were among countless Ukrainian families celebrating the holiday in the new circumstances. Many people’s houses have been damaged; Many more were completely displaced or fled the country as refugees.

Even in areas that have never been near the front lines, celebrations were being held amid hardship and uncertainty after weeks of attacks by Russian forces on vital civilian infrastructure that have disrupted Ukraine’s frequent power outages, The ability to provide heat and water has been crippled.

Such situations can turn the Christmas Eve meal into both an act of defiance and a display of resilience. In the Covetons’ modular home, the power flickered on two hours before dinner was to begin. But the torches were close at hand.

Ms. Cowton’s 7-year-old grandson, David, the youngest in the family, strikes matches to light the candles on the table with the swift hand of someone for whom it has become a nightly ritual.

“You can’t really call it a home anymore,” Ms. Kovton’s husband, Victor Kovton, said of the small prefabricated building, which was divided into three rooms. Without its electric heating, it would quickly cool down, explained Mr Cowton, 53, by lighting a gas heater instead. “But we will rebuild,” he said of the family’s lost home.

This will not be the first time that he has renovated his nearly three-decade-old home. “When we bought it, it was just walls and a roof, no windows, doors or floors,” Ms. Kowtan said of the house she bought in 1997. “And we’re building and building.”

They raised their two sons there, and then added on to make room for their daughter-in-law and eventually their grandchildren – three generations under one roof. He had more work planned when his 22-year-old son Mykhailo was scheduled to return from military service last year. He had joined the army in 2021.

But just days after she completed renovations to her kitchen in February, Russian forces occupied Makariv as they invaded Ukraine from the north. Fighting between Ukrainian and Russian troops soon engulfed the area.

“There were no sirens, no alerts, we just heard gunfire,” said Tatiana Kovtun, 30, who is married to the couple’s 30-year-old eldest son, Vitaly. They barely had time to grab a few belongings as they fled.

Weeks later, on 16 March, artillery fire burst through the wall of the elder couple’s bedroom. The second rocket hit the other wall. The gunfire and subsequent fire nearly leveled the house, and the family dog ​​was killed.

But the elder Ms. Covatan’s pain over her loss is tinged with optimism. She had safely escaped the city with her husband, Vitali, Tetiana and David before the devastating attack. Weeks later, Russian forces were driven out, and the family eventually returned to survey the damage.

They found their house in ruins, but an outbuilding—a barn with a small kitchen—had survived. So the couple moved there for some time.

“When we arrived and had to live in the barn, I was saying, ‘It doesn’t matter what condition we live in, if this is the house,'” Ms. Covatan said. “Home is home.”

Their modular building arrived in November, donated by a Ukrainian charity as part of a program called Nest, which has built 585 homes in the Makaryev region alone. This has made it possible for the family to remain on site while they attempt to rebuild.

Just before Christmas Eve dinner, Ms. Covatan’s phone rang. It was Mykhailo. His father’s face lit up, and David rushed to the phone to wish his uncle a Merry Christmas. Mykhailo – a cook in the army, his service now extended for the duration of the war – described the dinner to his fellow soldiers.

When her sons were young, Ms. Cowton said, she would send them outside to look for the first Christmas star in the sky before starting the meal, an Orthodox tradition. Now, David, Ms. Cowton’s grandson, begins to investigate when the family gathers for their dinner.

Only days earlier, on New Year’s Eve, the family had gazed up at the night sky together in horror, their eyes drawn by the unmistakable buzz of several Iranian-made drones launched by the Russian military. Most likely they were destined for Kyiv, part of a larger Russian offensive as the new year began. However, many were caught off guard: Vitaly showed videos of the explosions on his cellphone as the family gathered in the small kitchen.

The traditional 12 dishes served on Christmas Eve are served on Cowton’s modest table, and David helps his grandmother count them one by one. The first thing they served was kutya, a traditional dish made from wheat berries, poppy seeds, nuts, raisins and honey.

Some of the plates used by the family were pulled from the ruins of their home, in addition to a few things to survive.

The family recipe book was lost in the fire, so this year Ms. Cowton created several traditional recipes from memory.

The next year, Mr. Cowton said he expected his family to celebrate Christmas in their newly built home. They plan to start work in the spring.

It is work that keeps the family occupied and distracts the Kowtons from what they have to endure. Ms. Covatan calms her mind by telling herself that perhaps the house was just the price her family had to pay in this war.

Maybe this will prevent something worse.

“But when we rebuild the house, we’ll have a big party over there. I’ll get drunk and then I’ll start crying and I’ll cry out all the pain, every last drop of it,” she said. “Now is not the time to cry.”