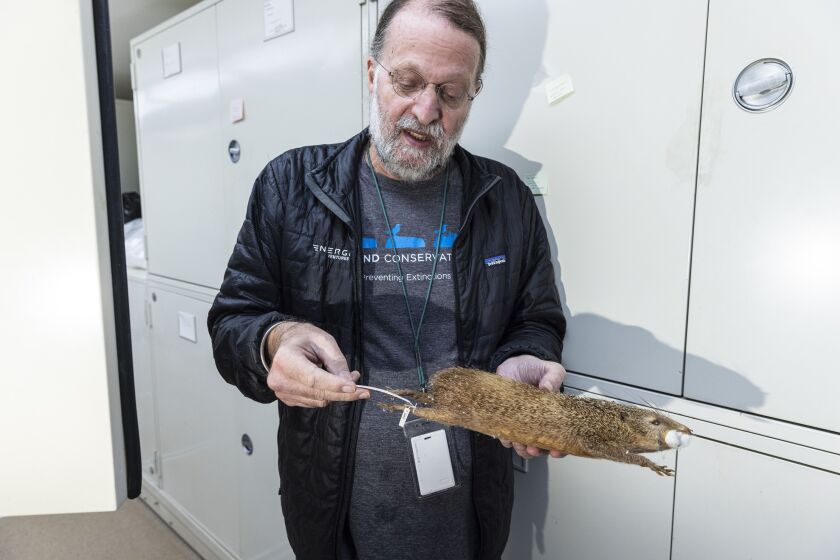 A map can come in handy for navigating the Field Museum’s corridors and narrow stairways to find Steve Goodman’s office.

And when you do, chances are he won’t be there. After all, he’s hardly been there for most of the 35 years he’s worked for the famed Chicago museum.

Of the museum’s 150 scientists, Goodman is the only one stationed in the field full time, save for trips to Chicago to bring back specimens.

For three and a half of those decades, he lived and worked in the island nation of Madagascar in Africa. Why? Because its isolation has made it one of the most biologically rich places on the entire planet.

“Four days after working at the Field Museum, I went to Madagascar for the first time,” says Goodman, 65.

Goodman is back in Chicago this time for a different reason. He’s promoting his new, 2,300-page, two-volume reference work “The New Natural History of Madagascar” (Princeton University Press, $175). it just includes all kinds of organisms found there, everything Brookesia micra chameleons – the size of a matchstick head – to whale sharks off the northwest coast of the island. Those sharks made a big impression.

“You’re next to one, and they come over to you with their mouths the width of this office, and you can feel them swallowing all this water,” he says.

Goodman is from Michigan, but his pronunciation is difficult now. He wears his long, thin hair back in a ponytail. In Chicago, he borrowed his grown son’s bike because in Madagascar he is either barefoot or wearing sandals most of the time.

“I didn’t want to invest in a pair of shoes for a two-week trip,” he says.

Madagascar is slightly larger than France and is located in southeastern Africa about 250 miles off the coast of Mozambique. Its coastline is surrounded by mangroves and coral reefs. Its craggy spine is the result of millions of years of tectonic and volcanic activity. The land dries up in the southwest, but gets wet in the northwest during the monsoon season.

The island also has a remarkable biodiversity, a result of its climate, diverse landscape and geological isolation. About 150 million years ago, it broke away from the rest of Africa, so species there evolved differently from elsewhere. For example, at least 120 species of lemur are unique to Madagascar.

About 28 million people live in Madagascar, although some places, such as the interior of Ankarana National Park in the north, are barely accessible. There, the limestone has been eroded into dagger-like pinnacles, with some of the passages between them so narrow that it is not possible for people to pass through them.

“It’s a labyrinth of pinnacles and crevasses,” says Goodman. “It goes on for kilometres.”

It’s these places where he and other biologists set up their tents and work to capture species of birds, bats, lemurs — “basically everything with scales, feathers and fur,” he says. Most of what they find ends up in Chicago.

Goodman said of his discovery of bats and fossils, “There are places where you’re on your stomach for 200 meters, your back scratches the top of the cave, and you come into an area that’s the size of two football fields.” is shaped.”

His wife Asmina is a native of Madagascar and son Hesham is 20 years old. Before having a child, Goodman says he would spend eight months a year living and working in the jungles of Madagascar, the rest in the capital city of Antananarivo with his wife.

Goodman becomes ant when he spends too much time in civilization, which his wife teases him about.

Sarah Ruane says she came to work as the Field Museum’s assistant curator of hepatology in 2021 partly because it meant she would get a chance to work with Goodman.

“He works really hard from the time he wakes up until he goes to sleep,” says Rouane, who went to Madagascar last year to study the snakes.

Long before sunrise, she watched Goodman checking the mammal trap.

Madagascar can be a difficult place to live in the middle of the wet season, from February to April, when the island is often battered by storms.

“Unless you’ve been in a cyclone, you can’t imagine the amount of water that can fall from the sky in a short period of time,” says Goodman. “It rained heavily. And it continued for hours and hours and days and days at a time.

He says it took about three and a half years to complete the new reference book on Madagascar, for which he is lead author and editor, drawing on the work of nearly 500 contributors. His first work on the same subject, published in 2003, was comparatively short – only about 1,700 pages.

Pulling together a book in a pandemic has benefits, says Goodman.

“Normally, you would write someone and say: We have this project going on. Are you interested?” He says “And they would say: Sorry, I’m about to travel. Contact me in six months. People were very happy to have something to do at home while waiting for their universities to open.”

As he brings it back to Chicago every summer, Goodman sees the mammoth work as more than just a guide to all things Madagascar.

“The natural world is disappearing at an alarming rate,” he says. “Places like Madagascar, Borneo, the Philippines, Peru are like the last giants of biodiversity. The Field Museum and its staff have an obligation to document what happens today and try to use those data to advance questions in evolutionary biology and the necessary steps for conservation.

Although their son is a student at the University of Iowa, Goodman and his wife have no plans to someday retire to the American Midwest.

He usually returned to Chicago for a few weeks each summer to drop off samples and “assure my colleagues that I was still alive.”

Goodman says he prefers the rice-based cuisine of Madagascar and the slower pace of big-city life.

Broken axles are common in Madagascar, he says, with potholes “you could lose a truck over.” That’s why Malagasy drivers usually carry two to three spare tyres, he says.

In Chicago with his family until mid-January, he is already looking forward to a 26-hour return trip via Paris.

“My family says the best thing about coming to Chicago is going back to Madagascar,” he says.