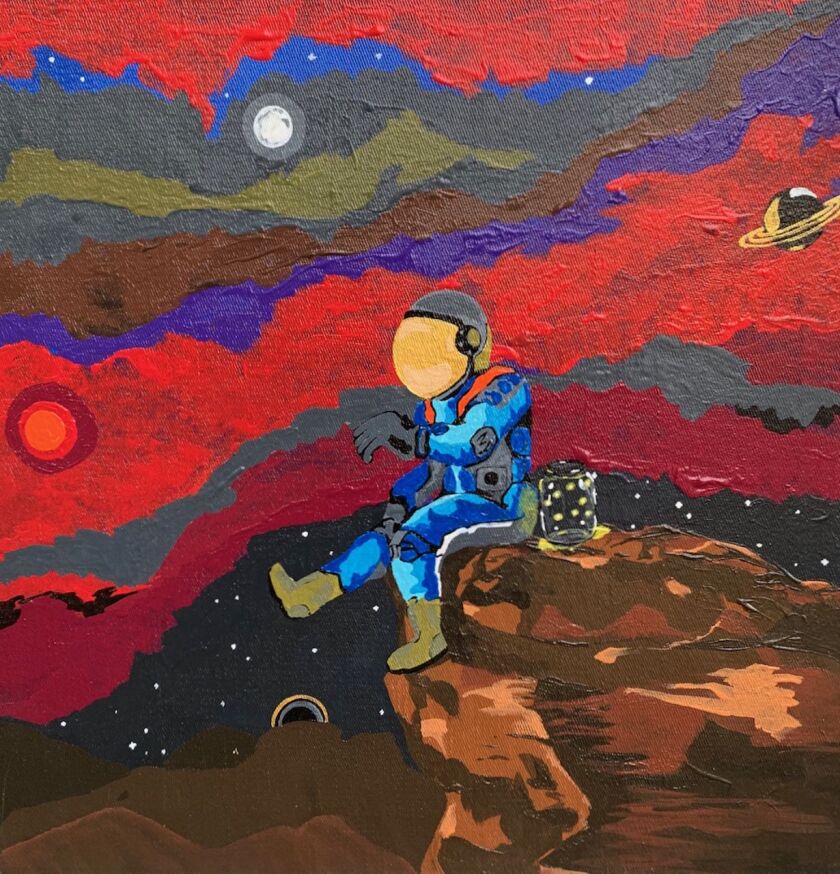 Andrew Wabacha portrays the astronauts, who are worried about how they tolerate being in isolation.

Wabacha himself has not traveled to space. He has never left Kenya. Where he lives in the East African country, people live very close together—many live in mud huts with no running water.

Wabacha has a chance to fulfill her artistic dreams — and maybe someday to travel outside Kenya — thanks in part to Jennifer Sapietro, who grew up in Naperville. In 2008, Sapietro, a housewife and daughter of a banker, helped start the Uweza Foundation. Among other things, it offers art programs for people in the sprawling Nairobi-area slum Kibera and displays and sells their artwork through a gallery.

“It gives people a second chance not to waste their lives or drown in misery,” says Wabacha, 25, in an interview from Kenya.

Sapietro, who has lived in Kenya for 11 years, was recently back in Naperville and Evanston, visiting family and raising money for the foundation.

She had just completed her bachelor’s degree in chemistry at Northwestern University when she first moved to Kenya to volunteer at a children’s home. She ended up in Kibera, where the mud streets are a sea of ​​huts with rusted tin roofs.

According to charitable organizations an estimated 50% of the population is unemployed. Those who do find work can earn perhaps $3 a day building apartments in Nairobi or opening and reselling bales of cheap clothing arriving from the United States and Europe.

“People like to say there’s a lot of talent,” she says. “There aren’t opportunities to use that talent.”

She lived in Kibera for nine years, now lives in neighboring Langata, is married to a Kenyan man and has two young children.

“You have a lot of enthusiasm to make your life better,” she says of the people who live in Kibera. “So you feel inspired to get involved.”

Sapitro says that, from her house, she can see Nairobi’s skyscrapers and a national park.

“You can see the horizon in the background, but there are giraffes and lions, and we can hear hyenas at night from our house,” she says.

The foundation began by raising money to send children to school in Kibera and has expanded to offer a football team and art classes.

Many of the paintings are scenes from Kibera. An artist named Wesley Osoro transformed the tin roofing sheets into pieces of emerald, sapphire, and amethyst.

Another artist, Douglas Maina, painted African elephants, leaders of a herd peering under a sky in shades of blue and plum and charcoal.

Sapietro states that artists such as Osoro often depict the harsh realities of their surroundings.

“It’s an extremely challenging place to grow up,” she says. “But Wesley paints in these bright colors because, having grown up there, he has a sense of pride, and he wants to tell a different story.”

artists paintings for sale Uweza Foundation website. Prices range from about $50 to $750, Sapietro says, with 60% of the proceeds going to the artists and 40% going toward art supplies and the foundation.

Wabacha – one of the gallery’s best-selling artists – says he has made about $5,000 in 2021 and hopes to make a living as a painter, although he now has a bachelor’s degree in real estate management .

Although this is not all that he paints, Wabacha’s work often depicts astronauts, mostly solitary, in Earth settings – sipping a drink, holding a flower, sitting on a rock beside a jar of fireflies. – Almost always a rotating night sky in the background.

“It’s finding out how lonely astronauts get,” he says. “Not only would someone like to be an astronaut. It has to be someone weird, an introvert. Someone who’s willing to stay away from people. That’s weird to me. It’s worth exploring and telling a story about.”