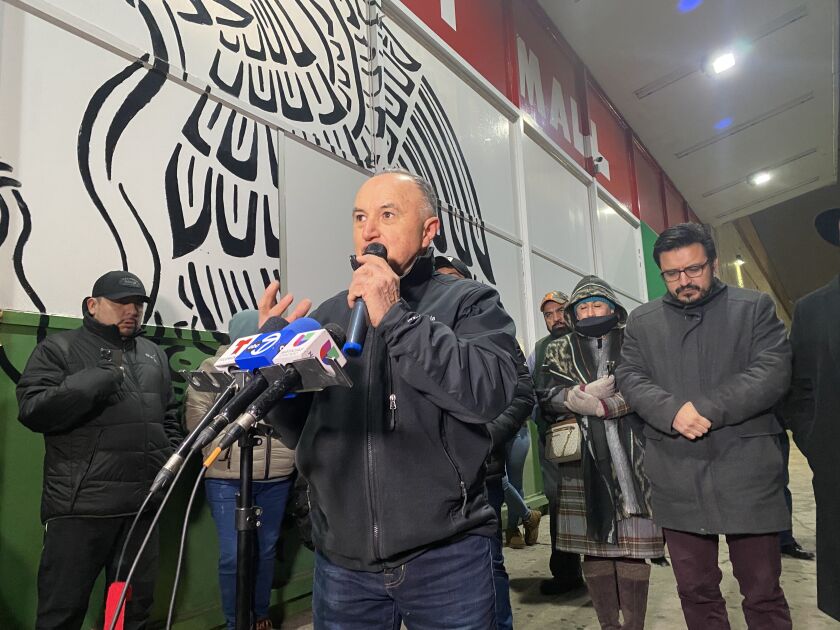 With weeks before their lease is due to expire, a group of vendors and supporters of the Little Village discount mall called on the mall’s owner Thursday not to evict them and for the city to intervene.

“We don’t have the famous brands of Michigan Avenue, but we still attract tourists from Florida to New York,” said Cocoy Malagon, who runs a dress shop in the mall.

The mall’s owner, John Novak, is pushing the 100 or so vendors to disclose their plans for the mall and to involve them in any changes that may come after the lease expires at the end of January.

Novak, president of Novak Construction and the owner of the six-acre property in 2019, has cast doubt on keeping the mall open in the past and has said he plans to eventually bring a national retail chain.

Malagon spoke at a news conference outside the mall located at 26th and Albany Streets near the iconic “Bienvenidos a Little Village” arch. Along were dozens of other vendors, supporters and local Ald. Byron Sigcho-Lopez (25th).

Sigcho-Lopez (25th) said, “These places should not be closed but should be expanded.” “They are not only part of the community but one of the city’s resources.”

Sigcho-Lopez called on Novak to meet with the group to discuss a solution but said “an option that should not be on the table is to close the mall.”

He said the mall’s vendors pay $20 per square foot in rent, and in fact one had contacted Novak, offering $30; But Novak reportedly replied that he would not accept anything less than $45.

Leaving Novak’s meeting with the group, the alderman, whose ward includes much of the Lower West Side, said he would call on the city’s planning department to intervene.

“Any development of this size has to be done with the community and the local alderman,” Sigcho-Lopez said. “We will exercise every option, including legal action.”

Iris Miranda, owner of an instrument store that has been there since the mall opened in 1991, said the mall offers good stories about entrepreneurs and culture in a community where the news often focuses on violence,

He said, ‘This is a positive aspect of our community. “We’re asking Novak to please let us stay.”

Michael Loria is a staff reporter at the Chicago Sun-Times report for americaA non-profit journalism program aimed at increasing the paper’s coverage of South and West Side communities.