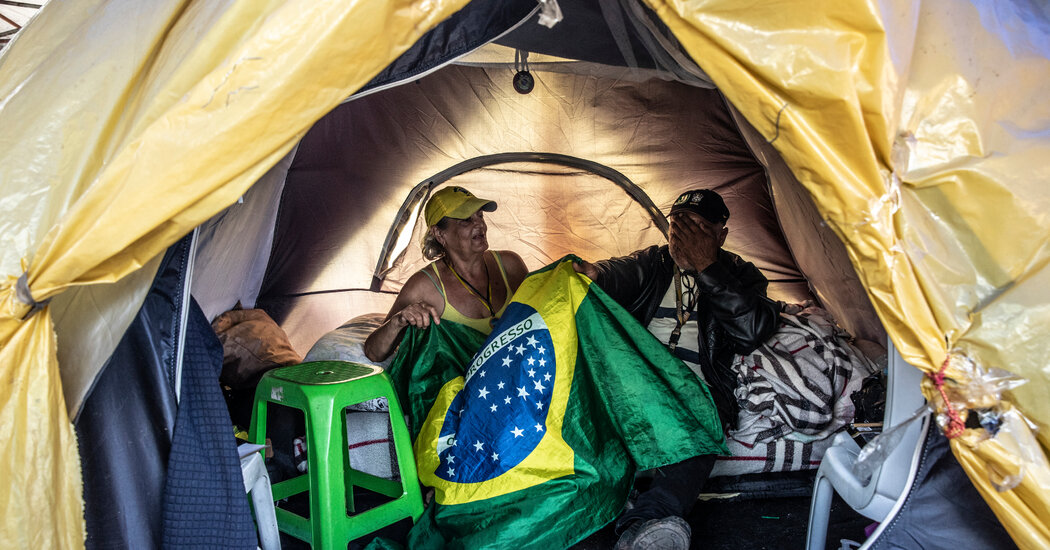 Brazilians head to the polls in October to elect a new president in an emphatic run-off between two candidates presenting markedly different visions for the future of Latin America’s largest democracy.

Mr Bolsonaro rallied supporters in what he called a left-wing assault on family values ​​and individual freedoms. He made enemies of academia, the media, and even democratic institutions, including Brazil’s Congress and Supreme Court.

Mr. Lula, who eventually won the election, vowed to govern for all Brazilians while returning the country to a more prosperous past, though his history of corruption scandals divided voters.

Much of the campaign, which was marked by misinformation and vicious online attacks, devolved into mudslinging with little discussion of the challenges facing the country’s next leader.

What were the issues?

The election comes at a critical moment for Brazil, where rising food and fuel prices, coupled with a painful economic recession, have led to a rise in poverty, reversing decades of social and economic progress.

Environmental and climate concerns were also looming large. Deforestation in the Amazon reached a 15-year high under Mr Bolsonaro, who has undermined environmental protections and argued the rainforest should be opened up to mining, ranching and agriculture. The destruction of the Amazon – and its impact on efforts to avert the climate crisis – has turned Brazil into a global outcast.

There were also concerns about the health of Brazil’s democracy. Mr Bolsonaro sowed doubts about the integrity of the electoral system, claiming without evidence that the country’s electronic voting machines could be rigged. His efforts fueled concerns at home and abroad that a possible loss for Mr Bolsonaro would prompt millions of his supporters to take to the streets and demand he stay in power.

What did Mr. Lula propose?

Mr. Lula oversaw an era of growth during his two terms in office, when a commodity-fueled boom turned Brazil into a global success story. He had promised that he would return the glory days to the country.

The left-wing candidate vowed to raise taxes on the wealthy and boost public spending, “putting the people on the budget.” His plans Include a number of social programs such as the $113 monthly cash vouchers proposed by Mr. Bolsonaro. Poor families with children will also receive an additional $28 per month for each child under age 6.

Mr Lula also promised to adjust Brazil’s minimum wage to inflation and revive a housing scheme for the poor, while guaranteeing food security for those facing starvation.

Mr. Lula, a former trade union leader, plans to accelerate development and “create work and employment opportunities” by spending on infrastructure. But he also laid out plans to invest in a “green economy”, warning that Brazil must shift to more sustainable energy and food systems.

On the Amazon, Mr Lula has indicated he will crack down on environmental crimes by militias, land grabbers, loggers and others.

What did Mr. Bolsonaro propose?

Mr Bolsonaro pledged cash payments of about $113 a month to families in need, expanding a temporary policy originally designed to ease the outbreak of the pandemic. The plan was designed to “reduce poverty and contribute to sustainable economic growth”, according to Mr Bolsonaro official policy plan,

Before the election, Mr Bolsonaro spent heavily on welfare and fuel subsidies.

He also pledged to create jobs by eliminating bureaucratic red tape, reducing taxes and investing in technology. Nodding to business leaders who provided him with crucial support during his first term for president, Mr. Bolsonaro said he would maintain a free-market approach and keep public debt under control.

Echoing rhetoric that won support from conservative and evangelical voters four years ago, Mr Bolsonaro also promised to protect “the family” while opposing legal abortion and transgender education in schools.

Mr Bolsonaro also promised to expand tough-on-crime policies, promising to further increase access to firearms, a policy he credits with a drop in violent crime across Brazil.

How did Mr. Bolsonaro sow doubt about the legitimacy of the election?

Brazilians cast ballots on electronic voting machines, a system that has been in place for more than two decades and has been a centerpiece of Mr Bolsonaro’s claims about the risk of electoral fraud.

Mr Bolsonaro has implicated a hack of Brazil’s election agency in 2018 as evidence of fraud, although an investigation showed the hackers were not able to change vote totals or access voting machines.

Mr. Bolsonaro has also pointed to Mr. Lula’s previous corruption charges, which were quashed, as evidence that he was a thief planning to steal votes.

The flawed polls also raised questions about the credibility of polling firms and bolstered Mr Bolsonaro’s claims that the polls did not accurately reflect his popularity. In the first round of voting, Mr. Lula received 48 percent of the vote, while Mr. Bolsonaro received 43 percent, much better than pre-election polls.