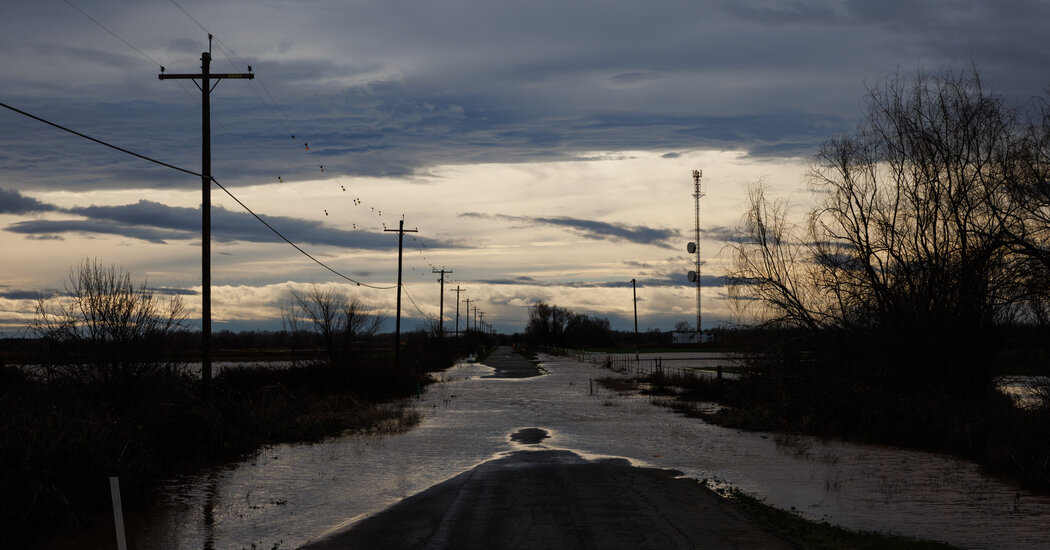 After a long, dry summer, winter has gifted California with water through a series of atmospheric river storms. Unfortunately, as these sky-high rivers meet developed areas covered in concrete and dammed-off rivers, they have brought destruction: floods, mudslides, washed-out roads, blackouts, uprooted trees and at least six deaths.

But California need not suffer passively from the ravages of drought and floods. To reduce risk from both, it can work with natural systems to return some of its land to water.

One way to do this is by using unique geological features called paleo-valleys. These depressions carved into the state’s central valley were formed by Ice Age rivers that flowed down the western side of the Sierra Nevada and were later filled with coarse sand and gravel from glacial meltwater.

Today that thick sand and gravel is a superpower, making paleo rivers exceptionally porous and capable of carrying heavy rains quickly underground. The permeability is so high that they can absorb about 60 times more water than the surrounding material affected by clay and silt. Only three of them have been found so far, but the hunt is on to find more and quickly.

Graham Fogg, professor emeritus of hydrogeology at the University of California, Davis, who has studied California’s water systems for 40 years, has a longstanding dream: to find a dozen or more paleo basins and use them to meet groundwater depletion. To do for Pumping and controlling rivers with dams and dams. Few people were listening for decades. But recently, this has begun to change. He and his colleague at Stanford University, Rosemary Knight, have persuaded the state Department of Water Resources to conduct a three-year survey to find more of them.

The big hope is that an array of paleo basins could be turned into giant stormwater drains to quickly absorb heavy rain. According to one, storm water spilling into valleys would sink underground and then move into surrounding clays and silts for more than 12 miles and hundreds of feet deep on either side of the valley. study, This will raise the depleted water table, which is important because healthy underground water systems can feed rivers from below and allow people to continue pumping water from wells. It can also make more water available to plants and soil, help maintain the rainfall cycle and reduce the risk of fire.

There is ample unmanaged surface water from precipitation and snowmelt throughout the state, which replenishes the Central Valley aquifers, providing more water to farmers, urban residents, and the environment. As of 2021, even with climate change, the state is likely to have enough water to recharge in the future due to more extreme weather. study,

In order to use paleo basins to store these large rains, the land above them must be protected for groundwater recharge. And that’s already a challenge: A paleo canyon found outside Sacramento has been earmarked for housing development, which would cover it with impermeable concrete and asphalt. Such decisions are usually governed by city and county governments, but the state may encourage areas with paleo basins to protect the land above them.

Land use is not the only issue. The state’s major aqueducts that carry water from north to south can play a large role in channeling floodwaters to paleo basins. Aqueducts are used in the winter when fewer growers need to irrigate their crops and can channel excess stormwater to depleted aquifers. Pipes can be added to the paleo basins to carry water to them.

To find more paleo basins, California’s Department of Water Resources is using aerial technology to map nearly 100 groundwater zones across the state. The good news is that the location of paleo basins is somewhat predictable: According to Dr. Fogg, there is very likely one in every tributary coming from the Sierra Nevada. Whether paleo basins will be used for recharge depends on local land use priorities and plans for each water basin are submitted to the state under the Sustainable Groundwater Management Act to balance extraction with recharge.

But governments that prioritize natural systems such as paleo basins will find they are of good value, with costs about half that of industrial interventions and often better at absorbing floods and supplying summer water. performs. Although construction continues in flood-prone locations, every dollar invested in purchasing undeveloped land for water diversions can save more than $2 to $5 in avoiding flood damage. Healthy systems can also maintain themselves by saving money that would be spent in a constant battle with natural forces.

Although California’s water is notoriously dry in the summer, a vast majority of winter water is less constrained by water rights. People are now trying to claim winter water to recharge aquifers so that more water is available in summer when more water is needed. Sorting it out is an opportunity to update the water rights system for growing populations, fragile ecosystems and the climate crisis of the 21st century to better serve the common good.

Paleo basins are one of California’s best opportunities to find a balance between dangerous flood waters and depleting groundwater levels. And if the state follows this strategy, it will not be alone. Many states, cities and countries are joining what I call “slow water movement” to restore the slow phases of water where surface and groundwater connect. Moving away from our strict control mindset toward greater respect for water’s natural cycles can make our human habitats more resilient and strengthen our ability to go with the flow.

Erika Gies is a National Geographic explorer and journalist. She is the author of “Water Always Win: Thriving in an Age of Drought and Deluge”.

Times is committed to publishing variety of characters to the Editor. We want to hear what you think about this or any of our articles. here are some advice, And here is our email: letter@nytimes.com,