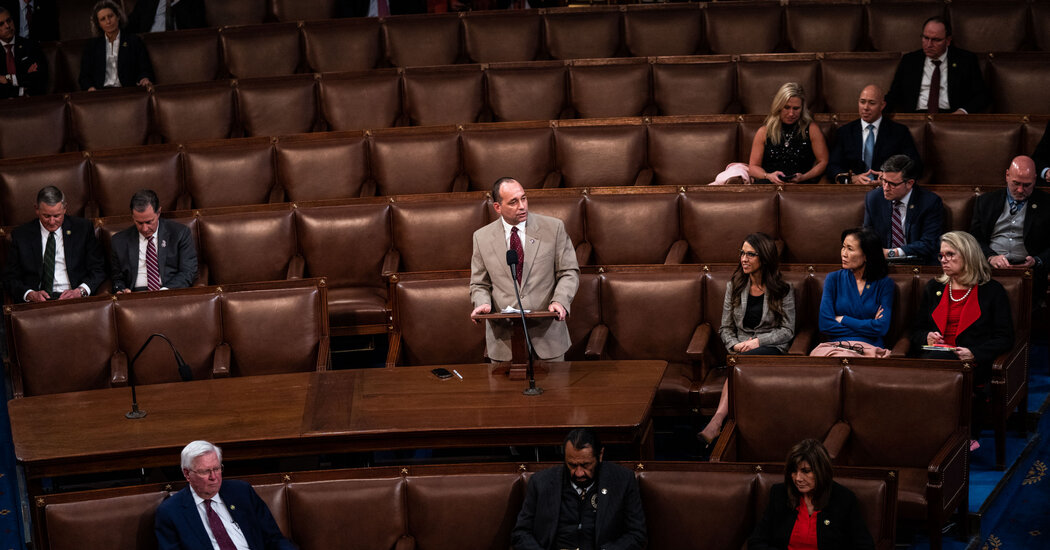 Back in the summer, a group of conservatives put forth a proposal with sweeping changes to the rules and procedures governing how Republicans run the House of Representatives. For example, we wanted regular, rank-and-file members to have more power to amend bills on the floor of the House. Before asking them to vote on the Bills, we wanted at least three days for them to read and consider the Bills. And we wanted to limit the scope of bills to a single subject so we wouldn’t be asked to vote on a legislative “Christmas tree” to pass on a tight deadline. We made these demands because the people we represent have told us repeatedly that Washington is broken, and we knew they wanted to see the status quo changed.

What the American people have tuned in to see this week is a healthy democratic process exactly as it was designed: with members in one place, engaging in debate, and interacting face-to-face. Important negotiations in a legislative body often take months or even years. Yet this is the one and only occasion we have to debate how the House is run every two years, with the election of the Speaker and the passage of new House rules.

While some have accused us of working for our own personal interests, we stand firm because we believe that the United States House of Representatives was designed to be the People’s House where the wishes of every American will be represented. That is why a majority of the votes of the House are required to elect the Speaker. Most of the people’s representatives should trust that person to lead us.

Throughout the past few months of conversation and debate, we have been very clear with Republican leadership that we want changes that empower regular members of Congress, each of whom represents a district of more than half a million people, Considered to get more meaningful inputs in law making. And some of those procedural changes have been accepted.

We also wanted to restore a 200-year-old measure of accountability to the office of the speaker, waived by Nancy Pelosi, that allows any member of Congress to vacate the speaker’s chair, so that each member is represented. Can raise voice in doing so. the wishes of their constituents. It was agreed upon only after 20 Republicans stood strong for three days. In fact, it was only after it became clear in November that Mr. McCarthy lacked the necessary votes that he agreed to any changes we proposed.

It is also important to remember that the American people voted for a new Republican majority in the House, albeit a small one, as a check on the Biden administration. Thus, Republicans in the majority must have complete confidence in our leader to fight President Biden’s agenda. We might have had that confidence in Mr. McCarthy if he had shown as much determination over the past two years in fighting against Democratic policies and for the average American as he did last week in losing so many votes to become Speaker. ,

We already know what the House looks like under Mr. McCarthy. He has had 12 years to prove himself as a bold and courageous conservative leader who was willing to stand against the leftist agenda. In contrast, when Republicans controlled the majority before 2019, they repeatedly voted with Democrats to pass big spending bills that helped us pay down more than $31 trillion in debt.

Throughout this process, one thing has become clear: Kevin McCarthy has failed to secure the trust of the entire Republican convention to be the leader fighting to change the status quo in Washington. It’s time for Republicans to move on.

There are many members in our conference who will be well-equipped to be speakers, push back against the Biden administration, and stand firmly for conservative values. These discussions, debates and deliberations are well worth the time it takes to elect a leader who will represent Republicans in America according to the demands of our current political moment. Regardless of whether Kevin McCarthy emerges as speaker in the current round of voting, I intend to work with my fellow Conservatives to ensure that he lives up to his commitments.

I understand the frustration of Republicans eager to operate a majority. But choosing a strong, conservative speaker lays essential groundwork for the rest of Congress. Empowering rank-and-file members to better represent their constituents will only strengthen the work we do on behalf of the American people, and put the good of the country ahead of special interests in Washington.

I came to Washington to challenge the status quo, drive transformative change in Congress, and defend the interests of the American people, and I intend to keep that promise. Even in this on-demand society we live in, it’s still worth taking the time needed to make a good decision, even if it means putting in a few extra days or weeks to get the best possible speaker.