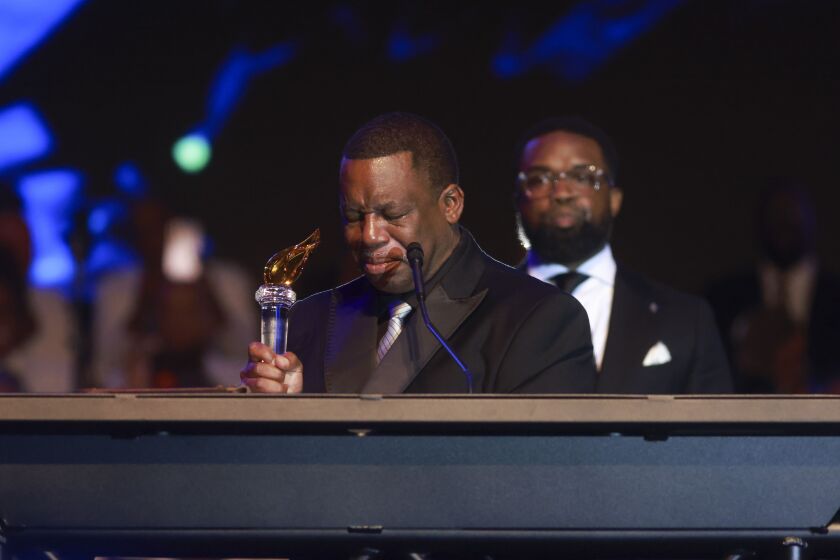 Rev. James Meeks handed the torch to his successor on Sunday at Chicago’s Salem Baptist Church, which he founded nearly four decades ago.

“I’m almost afraid to pass you because I know the burden,” Meeks said, handing a torch made of glass to visiting pastor Charlie Dates. “Charlie, all I can tell you is that God’s word will hold you.”

Meeks resigned as senior pastor of the Roseland area church on Sunday, its 38th anniversary. In his final sermon, titled “I Can Never Say Goodbye”, Meeks found parallels between his own departure from St. Paul’s and his congregations.

Meeks said, “No one could ever make me stop loving you.” “You’ve followed every crazy sight… and see where it brought us.”

Dates thanked Meeks for his service as tissue-box carriers debuted in the aisles of the 10,000-seat megachurch at 752 E. 114th St.

“You rolled the dice. You have made Chicago a better place to live, and you have turned darkness into light,” Dates said.

“Pastor Meeks has done so much good not only here, but in this community, our city, our state and our country,” Lightfoot said.

“From my personal heart,” Lightfoot said, “James Meeks has been there for me in my darkest moments, in my toughest times. He has reached out and personally lifted me up.”

Lightfoot handed Meeks a city proclamation for his service.

In a series of video messages, Meeks received thanks from other evangelists, including Joel Osteen of Potters House in Houston and Bishop TD Jakes.

Congresswoman April Bobo-Shaw has been attending Meeks’ meetings every Sunday for 10 years. She travels with her 9-year-old daughter from Hammond, Indiana, to hear Meeks preach.

“It connects with me. He’s been a blessing,” Bobo-Shaw said before the service. “Today is a sad but joyful day because Pastor Meeks is going to be able to rest. It is a blessing to celebrate him while he is here.”

In an interview before the service, Meeks, 66, said it was “a bitter sweet day” to end his 38-year tenure at the congregation he created.

“I have had the opportunity to walk with people throughout my life. So it is difficult to say goodbye to those individuals. It is a bitter sweet moment filled with all kinds of emotions and anxiety,” he said.

Meeks announced his plans for retirement in June and told the church that Dates would succeed him in leading the congregation.

At the time, Meeks said he was stepping down to usher in a new generation of leaders. Meeks, who was elected to three terms as a state senator and served as chairman of the state Board of Education, said he has no plans to return to politics.

Reflecting on his legacy, Meeks said he wanted people to understand the institute’s mission “not to be bound by the four walls of the church.”

He used the pulpit to transform the community around him. In 1998, Meeks campaigned to “dry out” the Roseland area by collecting signatures calling for the closure of 26 liquor stores. In 2008, he led a boycott of Chicago public schools to draw attention to disparities in school funding.

“I’m proud of the track record,” he said on Sunday.

Meeks founded the church in 1985 and built the congregation from 200 members, moving through a series of ever-larger buildings before building the current $50 million megachurch.

Meeks will remain active in the church’s charity Hope House. He said he plans to build 1,000 houses in Roseland and bridge the literacy gap among children.

Meeks has been a controversial figure. The day Chicago-based R&B star R.J. Kelly posted bond on child pornography charges in 2002 after Kelly sang to children during an event in Salem with Meeks, who was serving as the musician’s spiritual advisor at the time.

Meeks led a group of black clergy in protesting the 2010 law that legalized same-sex marriage in Illinois. He once said that a city policy giving favorable treatment to women and minority-owned contractors should apply only to black-owned businesses.

On Sunday, Meeks said it was important for him to retire while he still had time to mentor the next generation and give younger people a chance to lead.

Dates, in his early 40s, is a graduate of Salem’s church school, the now-defunct Salem Christian Academy. He was the pastor of Progressive Baptist Church in Chicago.

“For 43 years I have been doing this every Sunday of my life. And I think it’s time to give someone else a chance,” Meeks said.