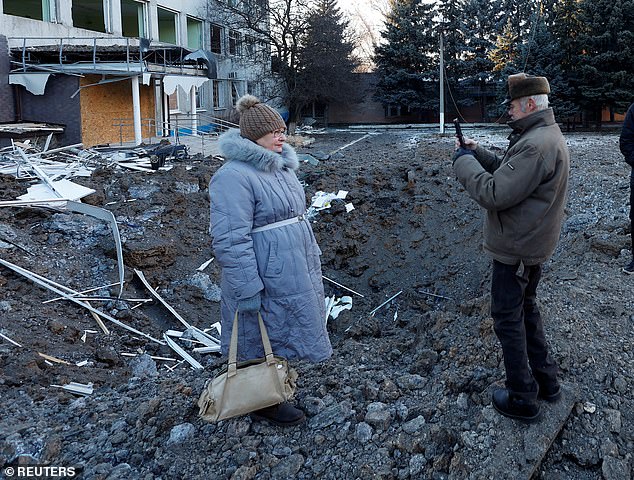 By Andy Gehring for the Daily Mail

Desperate Russian claims its forces annihilated 600 Ukrainian soldiers in retaliation, after reports last night that the strike had missed its target.

Moscow announced it had attacked a makeshift barracks in response to Ukraine evacuating 400 Russians in a missile strike on New Year’s Eve.

But in a major embarrassment for the Kremlin, Ukrainian officials dismissed the claim as ‘not true’ as journalists on the ground brushed aside the propaganda.

Russia’s Defense Ministry announced yesterday that ‘reconnaissance assets have detected and reliably confirmed’ that 1,300 Ukrainians were in two dormitories in Kramatorsk, Donetsk, where 600 were allegedly killed.

Desperate Russian claims that its forces annihilated 600 Ukrainian soldiers in a revenge attack left the country in ruins last night (Picture: a couple posing for pictures amid the rubble)

But the photos suggest the claim was false and part of a desperate attempt to garner public support in Kyiv’s disastrous New Year’s eve.

Images show the missiles did not score a direct hit – only landing nearby and blowing out windows.

There was no blood or any indication that soldiers were there, and locals said no ambulances were seen.

Kramatorsk Mayor Oleksandr Honcharenko said two schools and eight apartments were damaged in the attacks, but no one was injured. 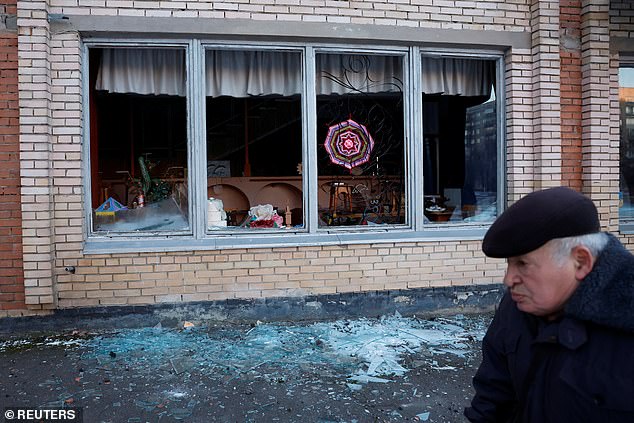 Images show the missiles did not hit directly – only landing nearby and blowing out windows (Picture: Man walking past a damaged building near the site of the missile attack)

Finnish journalist Antti Kuronen, who visited the site, said it would be ‘strange’ if soldiers were housed in the building as it ‘isn’t even insulated’.

Ukrainian soldiers are trained not to gather in large numbers within range of the guns.

The Russians made a mistake on New Year’s Eve that allowed a Ukrainian attack to kill 400 of their soldiers at Makievka in Donetsk. 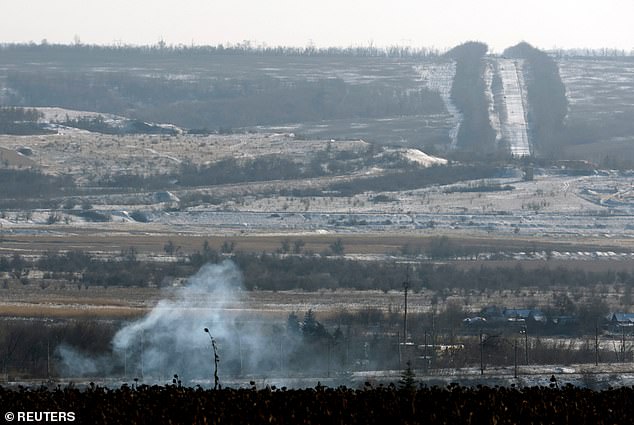 The strikes damaged two schools and eight apartments, but no one was injured (Picture: Plumes of smoke rise from the Russian strike)

Serhiy Cherevaty, a spokesman for the United Forces of Ukraine, said: ‘The Russian information is not correct.

The Russian army attacked Kramatorsk with seven missiles at 11.30 pm. But it had no effect on the army of Ukraine.

The attack comes after three people were killed in Russian attacks that broke the Kremlin’s own pledge of a 36-hour ceasefire until 11 p.m. on Orthodox Christmas on Saturday.