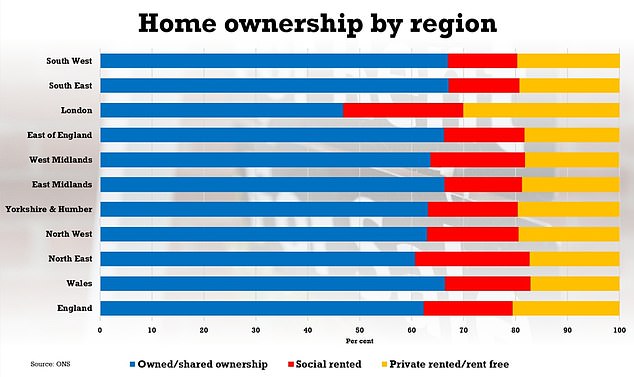 The number of people who own homes has decreased by half a million over the past decade, while those renting have increased by 1.3 million, new figures revealed today.

An analysis of the 2021 Census by the Office for National Statistics showed 15.5 million households own their homes either outright or with a mortgage. This was up from 15 million in 2011.

But homeownership as a proportion of the population fell from 64.3 percent to 62.5 percent over a decade.

At the same time the number of households living in rent increased from 8 million to 9.3 million (34.3 percent to 37.3 percent).

An interactive map produced by the ONS shows that home-ownership was highest in the Home Counties and the Midlands, with smaller enclaves in the north.

Use the interactive map below to find the status of where you live. 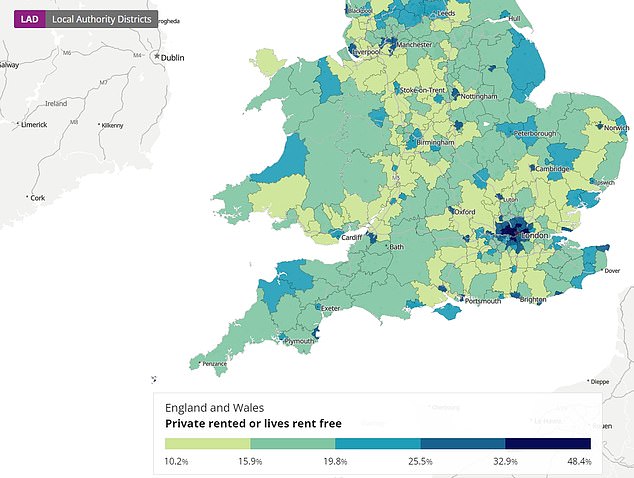 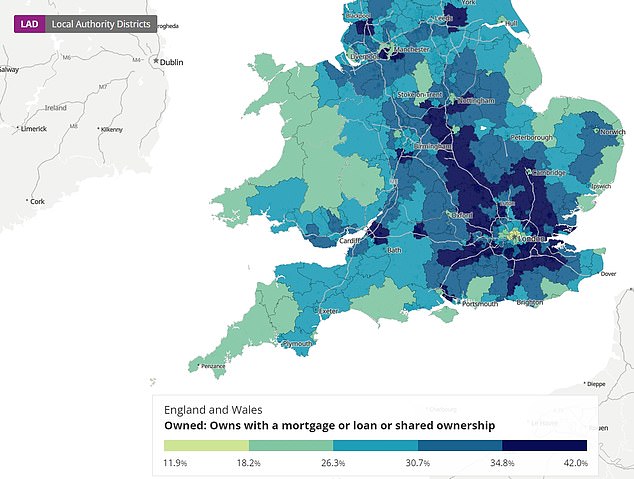 Nearly one million people live in homes without central heating

The ONS revealed today that almost one million people live in homes without central heating.

According to the ONS the average household was 2.4 people, this means around 880,000 people are using other means to keep their homes warm.

Another 8.5 percent—2.1 million households) had two or more types of central heat and the same number had electric heat.

Within England, London had the lowest level of overall home ownership (46.8 percent) of any region.

The ONS found that the capital also had the highest proportion of homes rented either privately (30 per cent) or in the social rented sector (23.1 per cent).

Two English regions had higher rates of overall home ownership than Wales: the South East (67.1 per cent) and the South West (67 per cent).

However, Wales had a higher percentage of people who owned their home outright (38 per cent) than any other English region.

The biggest increase for any type of housing was for households living in a flat, maisonette or apartment.

And the census showed that more than 100,000 were living in caravans.

Nearly 3.2 million people in England and Wales reported living at another address for more than 30 days in 2021, according to census data.

According to the Office for National Statistics (ONS), those spending time on second properties, such as holiday homes, students’ home addresses and partners’ addresses, account for 5.3 per cent of the population.

The percentage of people using a second address has increased since 2011, when 2.9 million people, or 5.2 percent of the population, did so. 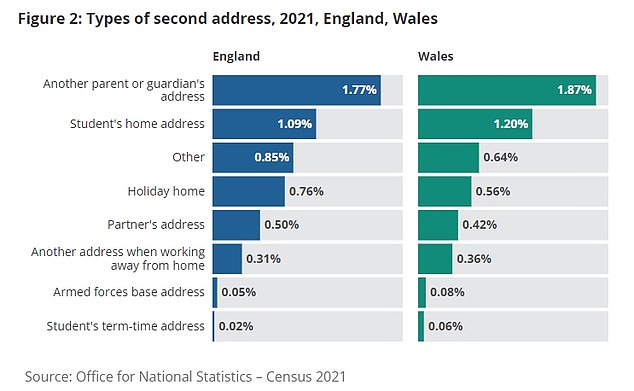 According to the latest figures, around 2.5 million usual residents in England and Wales have a second address within the UK and 736,000 have one outside.

The most common types of second address were the address of another parent or guardian, which would have been chosen for children whose parents lived apart (used by 1.1 million people), home addresses for students (655,000 ), and holiday homes (used by 447,000).

The ONS highlighted the potential effects of the coronavirus pandemic on the figures.

For example, students may be more likely to live at their family home for the entire academic year rather than use a term-time address.

The ONS said that in 2011, 715,000 people had a students’ home address as a second address, and the decline likely reflects a pandemic effect.

The proportion of people using holiday homes has remained broadly stable since 2011, increasing slightly from 426,000 to 447,000.

For the first time, the question also included an option for the use of a participant’s address.

A slightly higher percentage of usual residents in England used a second address (5.4 percent) than in Wales (5.2 percent).

The local authorities with the highest percentage using a second address were Oxford (15.6 per cent), Cambridge (14.1 per cent) and Exeter (13.5 per cent).

In Wales, the local authority with the highest proportion was Ceredigion (9.1 per cent).