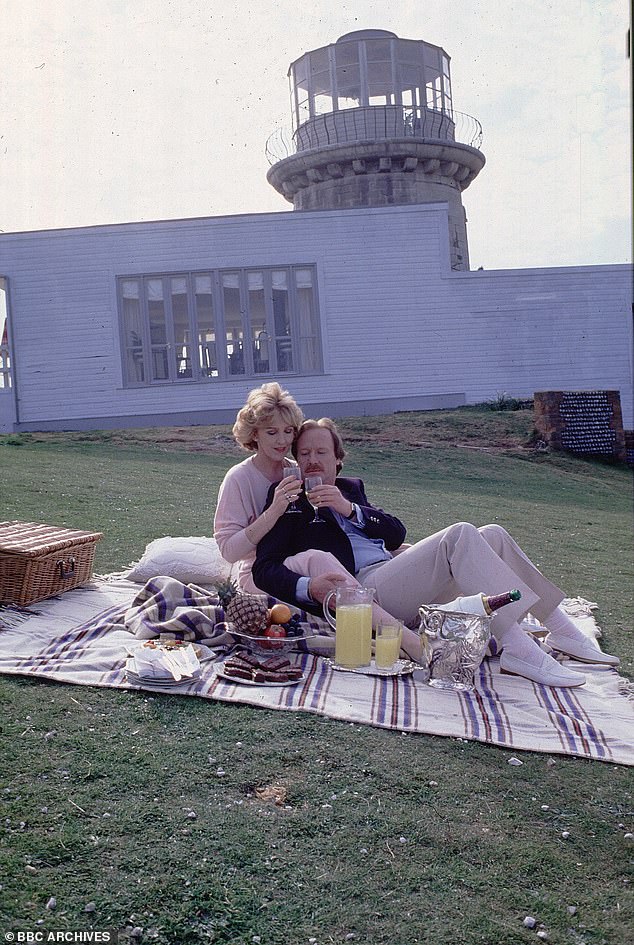 Mary Fisher lives in a high tower by the sea,’ viewers are told in the first episode of ground-breaking drama The Life and Loves of a She-Devil.

‘She writes a lot about the nature of love. She tells lies.’

This tantalizing opening sets the scene for the ruckus that follows in the award-winning 1986 BBC adaptation of the chilling revenge drama written by Fay Weldon, who died last week aged 91.

It proved to be necessary but inconvenient viewing from the moment it aired. Viewers were equal parts thrilled and horrified by Julie T. Wallace’s eponymous she-devil Ruth, who wreaks havoc on her unfaithful husband Bobbo (Dennis Waterman) and Mary Fisher (Patricia Hodge), who has become his mistress.

Belle Tout Lighthouse, on Beachy Head near Eastbourne in East Sussex, stood in for Mary’s High Tower – and its imposing structure and its surrounding crumbling, chalky rocks form a key figure in the atmospheric series, The Life and Loves of a She-Devil proved to be part

But there was another ‘character’ who caught the attention of the audience.

Belle Tout Lighthouse, on Beachy Head near Eastbourne in East Sussex, stood in for Mary’s High Tower – and its imposing structure and its surrounding crumbling, chalky rocks proved an important part of the atmospheric chain.

The BBC secured a one-year lease to film what is widely seen as Britain’s most famous inhabited lighthouse.

And it boasts a colorful past that rivals any drama it’s featured in.

‘It has a fascinating history and Fay Weldon is a big part of that history,’ says current owner David Shaw, who has run it as a bed and breakfast with his wife Barbara for 12 years. ‘We are also very proud to be a part of it.’

Certainly a lot has changed since the first rudimentary structure was built at Beachy Head in 1828 – although the treacherous sea below hasn’t been receding.

Due to the area’s rocky outcroppings, so many shipwrecks occurred in the 17th and early 18th centuries that the area became known by locals as the Mariner’s Graveyard.

By 1691, a petition had been started to build a lighthouse. It went nowhere, and for years, it was left to a local priest, Jonathan Darby, to act as the guardian angel of the area.

He was so concerned by the loss of marine life that, working with a chisel and spade, he single-handedly began enlarging an old smuggler’s cave at the foot of the cliffs.

There, on stormy nights, he hung lanterns to warn passing ships of dangers.

After his death in 1726, the abandoned cave was again taken over by smugglers, and seems to have been used more to deter shipwrecks. 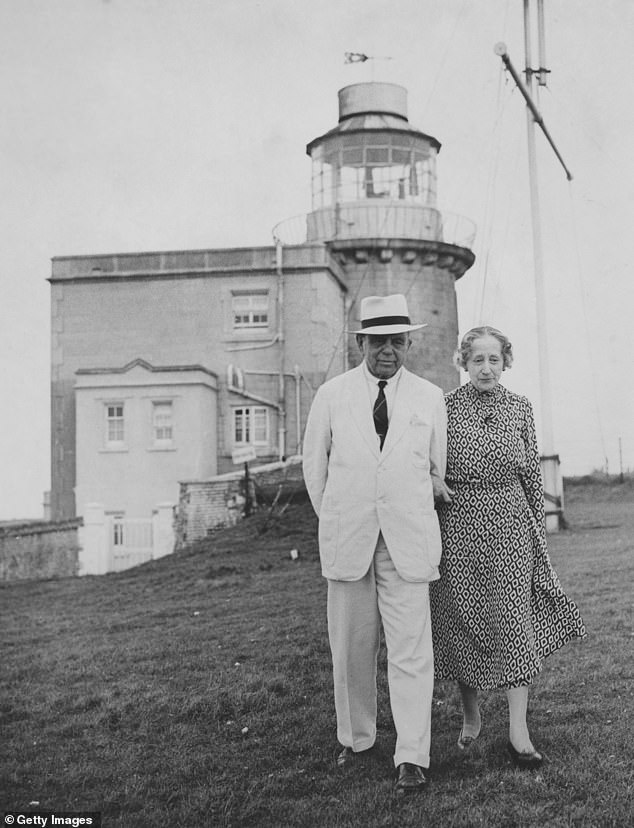 Then, in 1822, the Thames, an East Indiaman trading ship traveling from London to China, was driven ashore by a heavy storm.

While no lives were lost, the dramatic scenes were enough for a Royal Navy captain to petition Trinity House, an association concerned with lighthouse construction and maintenance, to act.

The first attempt was nothing more than a temporary experimental wooden structure topped with a revolving light, which became operational on October 1, 1828.

Elementary though it was, the lighthouse was deemed successful enough to warrant a more permanent structure in its place, and in 1831, local architects Hallett and Walker began their design, incorporating huge blocks of local limestone and Aberdeen granite.

Thirty oil lamps, each housed in separate reflectors, which rotated every two minutes, and using two gallons of oil an hour, were first lit on October 11, 1834, and 22 by the sea. Could be seen from miles away.

However, the lighthouse was not as effective as had been hoped. Sea mist often hugged the top of the cliff, obscuring the light, while ships that sailed too close to the cliffs were unable to see Belle Tout’s lamps because they were blocked by the edge of the reef.

Ships continued to break down, so in 1899 work began on a substitute at the bottom of the cliffs, where the current Beachy Head Lighthouse is located.

The Belle Tout remained in service until its replacement was commissioned on October 2, 1902, at which point it was decommissioned and sold by local estate agents, who described it as a ‘small, substantial three-storey building’.

Initially a tea shop, it changed hands several times before being bought by neurologist Sir James Purves-Stewart in 1923 for £1,500.

He made significant modernisations, building an access road, installing an electric generator and adding an extension, turning it into an unusual family home.

Its uniqueness was enough to attract the attention of King George V, who was recovering from illness in nearby Eastbourne in 1935, and he requested a visit.

Sir James later reported that the king and his wife were delightful visitors and easy to entertain.

‘My wife carried Queen Marys throughout our home, showcasing our modest family treasures,’ he recalled. ‘Meanwhile, King George entrusted himself to me as a detached guide and took a keen sailor’s interest in the various gadgets.

‘When we came to the foot of the spiral staircase leading to the Lantern Room, Queen Mary was already upstairs, enjoying the stunning view. She called him down, “George, don’t come up here, it’s too steep for you.”

In 1948, Sir James offered the lighthouse to Eastbourne Borough Council after they were evicted from the property during the war.

A councilor suggested turning it into a tourist attraction, but the idea was quickly abandoned given the cost of renovation and the limited income it was likely to draw.

Eight years later, in 1956, it was leased to another doctor, Edward Revill Cullinan, who, along with his family, carried out renovations with his own hands, adding a septic tank, electricity and water.

In 1962, the lease of Belle Tout was sold again, changing hands several times as a private residence, including that of novelist Noel Davidson, who lived there for six years from 1980.

When he left, the BBC that took the lease – for a rumored £250,000 – decided it would be the perfect setting for Fay Weldon’s High Tower.

When filming was completed, Belle Tout was once again put up for sale, initially bought by businessman Paul Foulkes and his wife Shirley, before being bought for £350,000 in 1996 by Mark and Louise Roberts, who converted it into a Tried to convert into family. House.

They faced the biggest renovation crisis ever: erosion threatened the building’s foundation and drastic measures had to be taken to prevent it from collapsing into the sea.

A rescue package was desperately needed, and it came courtesy of construction firm Abbey Pineford, which devised a pioneering plan to tow Belle Tout 56 feet off the edge of the cliff.

The project involved excavating the ground around the building, installing beams to support each wall, then moving it using a system of hydraulic jacks, which leveled the building with four steel-topped concrete beams. gave.

It was a remarkable feat of engineering – and an expensive one, at an estimated cost of £250,000.

On a bright March day in 1999, Belle Tout’s monumental move began, unfolding over two days in front of media from around the world, until she reached the position she is today. 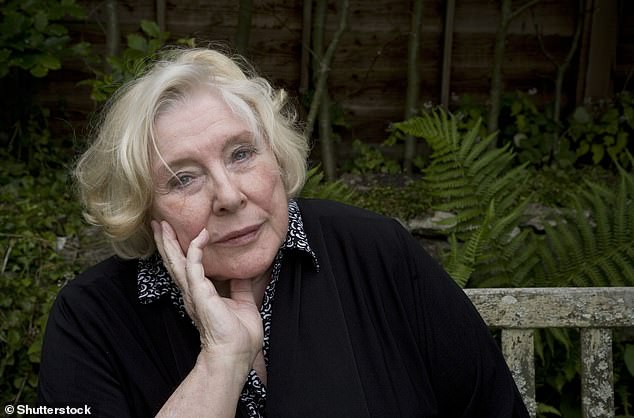 The award-winning 1986 BBC adaptation of the chilling revenge drama was written by Fay Weldon, who died last week aged 91

Further changes were made: in 2007, Roberts put Belle Tout up for sale with a guide price of £850,000, and it was bought the following year by Shaw, who admits he bought it on a whim.

David Shaw said, ‘I had a few months to think about what I was going to do with it, as it was not in a great condition and needed a lot of TLC.’

‘The builders did a pretty solid job on it until we opened in 2010.’

Hundreds of guests have enjoyed 360-degree views from its dining room: the red and white Beachy Head Lighthouse to the east, Burlingame Gap to the west, across the sea to the south, and Sussex Downs to the north.

David hopes they can do this for years to come – although the lighthouse will need to be moved back again.

‘The rocks are eroding on average about 2 feet a year, so I think we’ll have another 20 years or so before it becomes necessary,’ he says. ‘I don’t have to worry about it right now.’