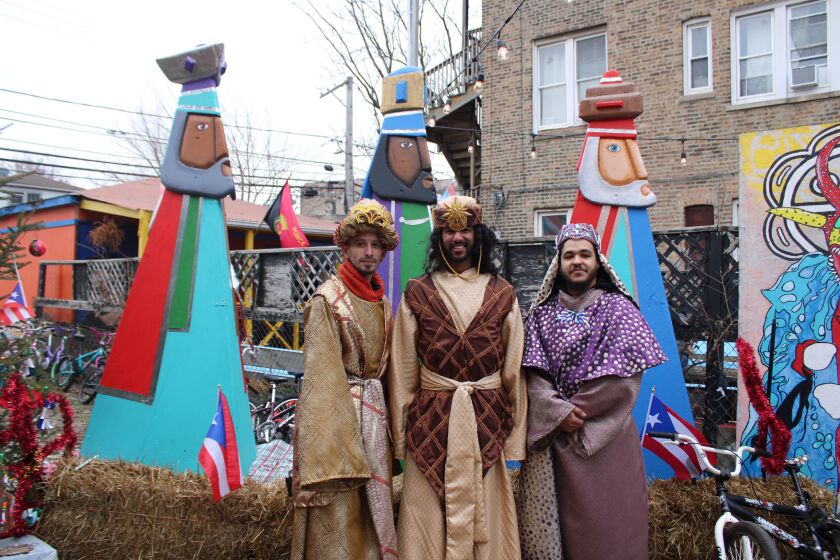 Due to recent history, January 6 is probably not regarded as a day of happiness by most people.

But throughout Chicago, Latin American families of all backgrounds celebrated annual traditions on the Friday that coincides with Epiphany, or Three Kings Day.

Known in Spanish as “Día de los Reyes,” the religious holiday has cultural meaning for Latinos of all backgrounds.

The children got a chance to choose from a variety of gifts including new cycles and books.

Three members of the cultural center dress up as the three wise men so families can take pictures with them.

Humboldt Park resident Matilde Nieto brought her three sons, Alexis, Omar and Isail, to the event to receive gifts. her family is mexican so they’ll be celebrating with a rosca de reyes His own.

“Let the tradition continue. May it never be lost. Let the children continue to believe that the Three Wise Men exist today,” Nieto said.

Gabby Rodriguez, 9, helped wrap some gifts with her mom, Glenda Guzman, who was the cultural center’s lead organizer for the event.

Rodriguez said her favorite part of Three Kings Day is waking up to gifts from the three wise men — just like Santa Claus on Christmas Day.

According to Guzmán, the cultural center has been doing this program for more than 30 years.

“Last night, Gabe was in charge of planting the grass [symbolic of the wise men’s camels] under her bed so that in the morning all her gifts are under her bed,” Guzmán said. “That’s how we keep tradition and Puerto Rican culture alive.”

The cultural center also celebrated the 28th anniversary of the two giant steel Puerto Rican flags that were put up on Division Street at California and Western avenues.

José López, executive director of the Puerto Rican Cultural Center, described the day they went through as “indescribable”.

“To see those two flags that go 59-feet high, 56-feet wide and 20 feet into the ground, Paseo Boricua, is a re-evaluation of our Puerto Ricanness, of our presence and persistence in the city of Chicago.”

Of course, the Latino population in this city is not a monolith.

Mexican Chicagoans can buy rosca de reyes from their local bakery – a wreath cake with three plastic babies baked in it. Whoever finds a piece with “Baby Jesus” on it gets to make a spectacle for the next holiday: Candlemas, or “Dia de la Candelaria,” on February 2.

The line for Roskus at Artemio’s Bakery, 1443 N. Milwaukee Ave., in Wicker Park was out the door. An employee told the Sun-Times that they usually sell hundreds every year and sell out every time.

In West Humboldt Park, at Panaderia La Central, 3911 W. North Ave., owner Rosa Acevedo said she expects to sell twice as many Rosca’s as last year — about 500 total and the most sold in her 25 years of operation. .

While she looks forward to the day every year, Acevedo said this year has been a bit difficult, as supply chain shortfalls have persisted since the start of the coronavirus pandemic.

“The bad thing is I can’t buy a lot of things now, like my boxes,” she said. “But, I’m looking forward to it because a lot of new people I’ve never seen before, and it’s all by word of mouth.”